We respect the HTC Hero because it was one of the first Android-powered smartphones launched in the US. Going back, we see the Hero was the modified version of the T-Mobile G1 and we can say it’s these handsets that started out the era of Androidmania. All in all, we can talk about the HTC Hero for hours mentioning its advantages and lacks, but at this moment we have another reason to recall it — looks like Walmart tried to check out our memory by introducing the HTC Hero instead of the HTC Evo Design 4G. 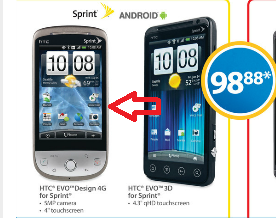 We can’t say what the main reason of such confusion was, but the same thing’s happening in Sam Club’s documentations. I mean the HTC Evo Design 4G is called the HTC Hero. This is strange, because both smartphones have nothing in common. It’s noticed even at a glance — the HTC Evo Design 4G is a standard HTC device in terms of design, while the HTC Hero clearly shows the imperfection of the then handsets.

However, we all understand someone has made a mistake. The phone offered for $98.88 is the HTC Evo Design 4G, and not the HTC Hero.

HTC Kingdom Coming to US Cellular As HTC Hero S?