US Cellular Releasing the HTC Merge on April 29?

The HTC Merge has been long rumored to get launched by the US Cellular carrier, but then the rumors stopped. Then they were replaced with the rumors that the Cellular will host the HTC Merge at the end of April. The carrier officially denied the info, stating that they are planning the release of the gadget by the end of spring. But as it turns out, another leaked screenshot found on engadget takes us back to the initial release date — April 29. The leaked spreadsheet is an internal document of the US Cellular. 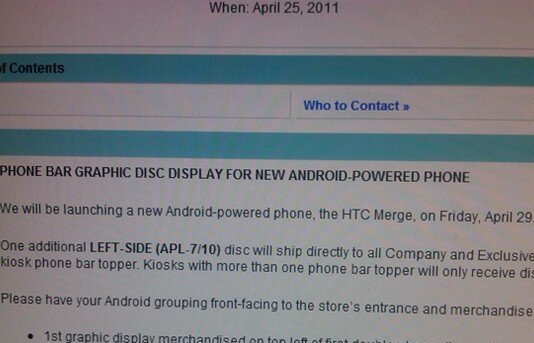 So far the HTC Merge is available only via two not that popular carriers — Alltel and Cellular South. There were also leaks mentioning the device would also come up with Verizon branding.

The HTC Merge is actually not that bad gadget featuring a QWERTY keyboard, 3.8 inch display, 5 megapixel camera and, unlucky, Android 2.2. Well, I guess as soon as it gets released by the Verizon Wireless, the update to Android 2.3 is guaranteed.

As for now we better have patience and wait till next Friday to see if the release actually takes place. If we believe the leaked doc, we can assume that the works over the gadget are done and there’s simply no reason to make any kind of release delays.

There’s just a piece of info missing about the device, that is the potential price tag of the HTC Merge. Most likely it will be something like $125.