Canada is actively working to bring the latest HTC One handsets to the country. The HTC One V was announced to be launched via Telus, while the HTC One X and the One S were said to land on Rogers. As for now, we have learned the only quad-core smartphone from this line dubbed the HTC One X is available for pre-order at NCIX, which is the most popular electronics retailer in Canada. The latter requires $799.99.

The HTC One X comes packed with a quad-core Tegra 3 chipset, which means the phone has no chance to work on LTE network. I can’t say which one of these features is more important, but probably Canadian users would prefer to own a faster working handset than a faster browsing one, because the LTE network is not that popular in the country. Other than that, the HTC One X sports a 4.7-inch HD touchscreen, an 8MP rear camera, 1GB of RAM and 32GB of internal memory. Plus, it runs Android 4.0 Ice Cream Sandwich with HTC Sense 4.0. 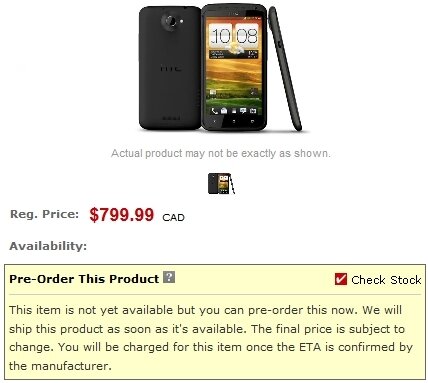 As a reminder, when Rogers announced its plans on the One X, everyone was asking whether the carrier’s model would sport a quad-core processor. A little later it was known the device would come with a dual-core Snapdragon S4 processor. Thus, the HTC One X launched via NCIX will be the only handset with a quad-core chipset, which becomes the key feature for the sales.

Previous Post Sprint HTC Evo One on June 6 Next Post Performance Boost Coming to HTC Vivid with Android 4.0 ICS Update
Recommended for you