We’ve heard about the HTC EVO Design 4G with at least three names, that is HTC Kingdom, HTC Hero S and the actual name. That’s why we cannot be sure what will be the final name of this device. The only guess that we can make for now is that the handset will appear in the market within a few days due to the leaked info about the specs and render pics. 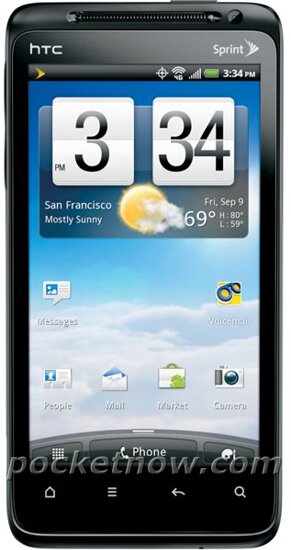 Now we have another leaked shot of the handset, which will most likely be the same render for HTC and Sprint to promote the device after it’s launched.

The specs of the HTC EVO Design 4G include a 4-inch  qHD display, Android 2.3.3 Gingerbread, a 1.2GHz  dual-core processor, 768MB of RAM,a  5MP camera with the capability of shooting 720p videos and a 1.3MP front-facing camera for video-chatting. All of these features have been leaked for around 4 months, which means that some of them might have gone through changes to meet the expectations of the future buyers.

Most likely the handset will not be listed in the high-end lineup of Spint’s HTC devices, such as the HTC EVO 3D or the original HTC EVO 4G. The expected price of the handset is below $200 with a two-year contract.

HTC A7373 Leaked in Sprint Doc