This information is no longer just a rumor. Microsoft has officially confirmed it by calling the update Windows Phone 7.5 on their website. 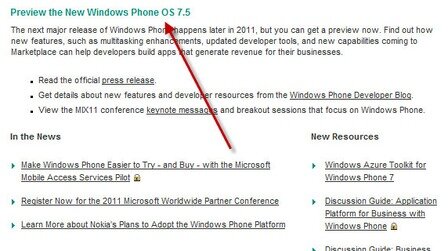 The decision to rename the Mango to Windows Phone 7.5 seems to be very logical. After all, this update is very important for Microsoft’s Operating System, and after its release WP will be able to compete on equal footing with such systems as Google Android and iOS.

Microsoft is still working on its Windows Phone 7.5 Mango, and seems like there is still much to work on. However, we have heard that next month application developers will get access to it. And the official release of Microsoft’s OS will take place this fall.

Several important innovations are expected to appear in the Mango (or should we already call it Windows Phone 7.5?), without which no good OS can exist. For example, multitasking support will at last appear, and developers will get access to the camera and a number of its sensors, which will allow them to create more interesting applications.

Besides, the users expect Windows Phone 7.5 to have the new Internet Explorer 9 with HTML5 support and better Windows Marketplace and Skype.

HTC Push out Windows Phone 7 Update for its Phones