When the HTC Titan started hitting the shelves, almost everyone was sure the handset would become a bestseller due to its monster-sized touchscreen and Windows Phone 7.5 Mango OS. Of course, there are other respectable features too, but Microsoft’s current chassis for its native mobile operating system doesn’t allow hardware makers to play with more powerful specs. Anyway, seems the original Titan will resign to give way to others, especially to its sibling, dubbed simply the HTC Titan II. The reason I am talking so rudely is the HTC Titan is silently being removed from several UK retailers and mobile operators.

The list of such sellers includes The Carphone Warehouse, O2, Vodafone, T-Mobile and Orange. And though the phone can still be found at Amazon UK, Expansys UK, Clove UK and BuyMobilePhones, obviously, most retailers and mobile operators empty their store-houses to bring other handsets. 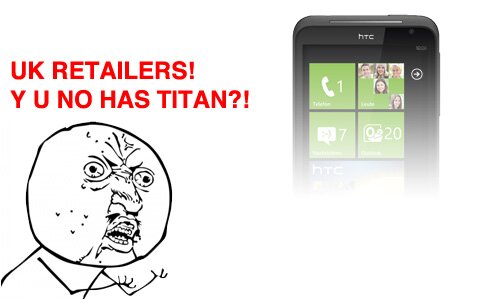 No idea why the phone needs to be completely removed from stores, but I guess the HTC Titan has not ensured respectable sales, and as we know exhausted horses are killed.