HTC’s first Windows Phone 7 device was the HTC Arrive, the so-called WP7 version of the popular HTC 7 Pro, supporting Sprint’s CDMA networks. The smartphones was rumored to be codenamed as the HTC Ruby. That’s the main reason the name HTC Ruby was forgotten for a while. 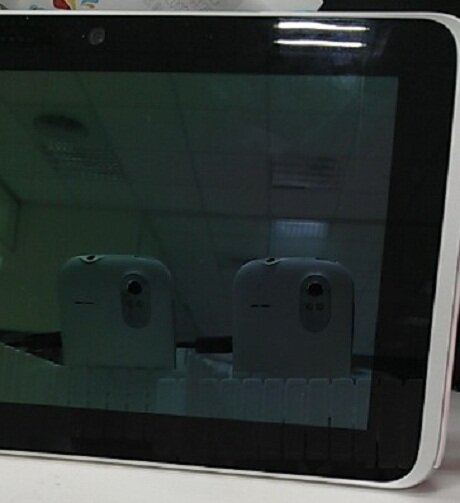 But later the HTC Ruby started to appear on leaked pics again, proving that it wasn’t the same HTC Arrive. Not so long ago the device was spotted being reflected on the surface of the HTC Flyer. The pic demonstrates two units of the HTC Ruby, while the bad news is that we can only see the back side of the handsets. The exterior of the mysterious smartphone doesn’t resemble the HTC Arrive in any sense.

The only features that can be revealed from the shot are the camera with the LED Flash (which can be a dual flash, too) and the 3.5mm audio jack.

There is something that will most likely interest the customers even more — the operating system of the handset. But here we do not have any chance for guessing: It can be an Android/Windows Phone or even a phone based on Brew.

Previous Post Target Offers HTC Sensation 4G for $99.99 Next Post HTC Wildfire to be Launched on August 3 for $79.99 via T-Mobile
Recommended for you

HTC Arrive for $25 via Wirefly