HTC Rezound to Get Android 4.0 ICS Update on May 9

All Android-based smartphones are waiting for Ice Cream Sandwich but not all of them will be given a chance to be upgraded to the newest variant of the OS. Only a couple of handsets have got the update, while the future of the rest is not that clear. Beyond doubt, the carriers, manufacturers and Google are doing their best to push out Android 4.0 ICS update as soon as possible but there are several phases necessary for any update to pass through to reach the end user. As to the HTC Rezound, its update is in the penultimate phase, thus, it is still being tested.

A leaked Verizon doc shows timing for some Android handsets. HTC Rezound update process will be completed on May 6, and it will be pushed out on May 9. The Motorola Droid RAZR and the RAZR MAXX will get their updates on May 21 (the testing will end on May 17). The 3G and LTE variants of the Motorola XOOM tablets are also mentioned in the doc, though there is no word regarding their estimated delivery time. 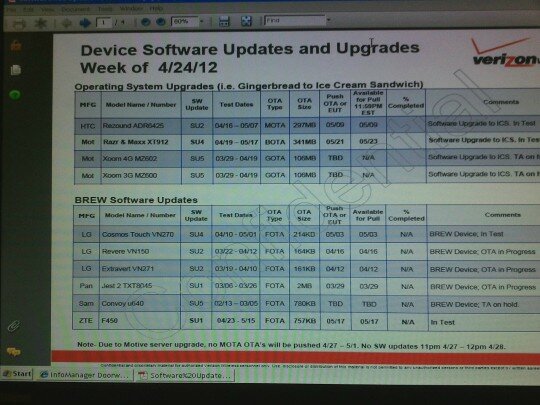 Previous leaks used to claim Android 4.0 Ice Cream Sandwich would be available for the Rezound on April 6 but the date was pushed a bit back. Either way, this time everything sounds more believable.

HTC Rezound to Get Android 4.0 ICS This Week