2012 has been a game changer in smartphone technology and we have seen some of the greatest phones ever made landing on shelves. At the very top of the pile sits the HTC One X and the Samsung Galaxy SIII, both flagship phones for their respective manufacturers and both expected to increase Android’s domination over Apple in market share. Of course, it is not possible for both of these phones to be top dog, so which one is the best? Let’s find out by putting the two head-to-head.

Both of these phones are giants and sit at very top of the smartphone market in terms of size. Of the two it is the One X that is the slightly smaller thanks to its slightly smaller screen, measuring 70x134mm compared to the Galaxy’s 71x137mm. The SIII is one of the thinnest smartphones ever made at 8.6mm, giving it the edge over the 8.9mm HTC which is slim in its own right. As the smaller of the two handsets, the HTC One X weighs in at three grams less than the new Galaxy – 130g to 133g. 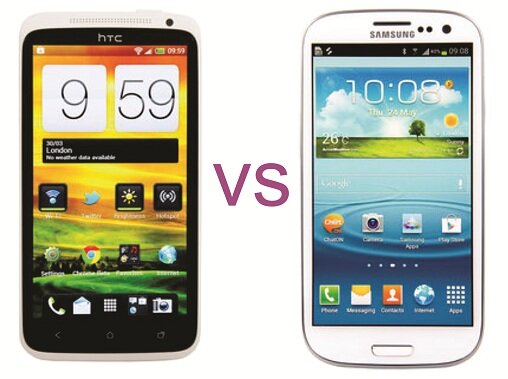 The HTC One x comes with a 4.7 inch Super-IPS screen while Samsung go with a slightly larger 4.8 inch Super-AMOLED display. Both phones have a 720 x 1280 resolution and each has incredible pixel density – the One X at 312ppi and the S3 at 306ppi.

The quality of the display on both of these phones is second to none. Colours are bright and vibrant and blacks are deep. Brightness, contrast and viewing angles are top-notch on each and everything from gaming to watching video is an absolute joy. Both phones use the now standard Corning Gorilla Glass, although the Galaxy uses the newest version of the glass.

Nothing really to choose between the two in the camera department as both HTC and Samsung go with an 8-MP primary camera and 1080p HD video recording. The features are also well-matched, each coming with simultaneous HD video and image recording and face and smile detection, but is the Galaxy’s image stabilisation and touch focus that give it the edge. Thanks to Samsung’s S-Voice technology, the SIII camera can be set-up to take photos simply by saying “Cheese!” which means you can photograph without ever having to touch a button!

Hardware is an area where both HTC and Samsung excel. The HTC One X comes packing a Nvidia Tegra 3 quad-core chip, clocking 1.5Ghz, while the Galaxy SIII uses Samsung’s own Exynos 4 quad-core processor, clocking 1.4GHz. As you can well imagine the power and speed that these phones deliver makes using them an absolute breeze. Both phones come with 1GB RAM but it is Samsung that offer the better internal storage, coming in 32GB and 64GB options compared to just the 32GB option offered by HTC and including a microSD card slot, something which is a big miss in the One X.

The latest version of Android, 4.0 Ice Cream Sandwich is used by the One X and the Galaxy SIII; however, there are differences when using each of the devices thanks to individual UI’s. HTC use HTC Sense v4.0 and Samsung use their TouchWiz UI. It has to be said that HTC Sense is the slightly better of the two in terms of usability.

The HTC One X houses a smaller 1800mAh battery that the Samsung which has a 2100mAh battery. The new Galaxy has the edge when it comes to battery life and requires few charges that the One X.

These two phones are evenly matched across the board and it is hard to pick a winner, but as this is a head to head, one phone must come out on top and that is the Samsung Galaxy SIII. The flagship Samsung device just has a little bit more in the majority of departments and therefore gets the nod.

Previous Post HTC One S vs. iPhone 4S: Fight of the Dual-Cores Next Post HTC Thunderbolt to Get ICS Update By the End of August
Recommended for you