HTC One X for Everyone

What do you know about the HTC One X? Is it the best Android-powered device available in the market? Does it sport the best design? Does it come with the latest innovations and achievements of the tech world? All these questions require exact answers but how can we answer them if this handset is launched in many guises? So let’s put together the feature rundown of all the variants of the phone. The pricing is one of the most affecting factors when buying a handset, so we should pay special attention to it as well. The HTC one  X deals from rightmobilephone.co.uk reflect the real picture, and if you have been looking for the best offers, you will probably find them there.

We must firstly take a look at the international variant of the HTC One X because it was launched earlier than the rest. The phone was initially codenamed as the HTC Endeavor, hence many users were waiting for an experimental smartphone because its naming didn’t suggest something more. But as time showed, the One X was designed as the highest-end One series smartphone, which has no equals in the world, though we won’t be able to state that with the same firmness after the Galaxy S3 is launched.

The European variant of the One X was launched in the beginning of April. A myriad of mobile operators were selling the device for free, though the monthly plans were not that cheap — they started at £36 ($55). The unlocked HTC One X was offered for £490 ($780). Seems HTC did its best but immediately after the launch users began reporting about different bugs found on the phone — a display flaw defect, a power management problem, and other bugs regarding such important features as the camera. Though all those issues were solved the phone’s reputation suffered, and when the company announced there were problems related with Snapdragon S4 chip production, everyone concluded the American models would be released with more bugs on board. Moreover, the earlier announced May 6 launch date for AT&T was said to be delayed. 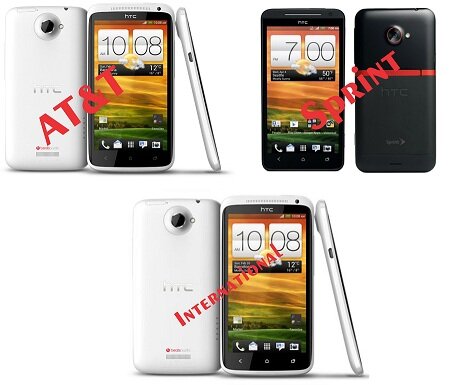 Fortunately, AT&T was more consistent and released its version of the One X in time. The device has only one difference in comparison with the international variant — it is packed with an S4 dual-core processor to support AT&T’s LTE network because the quad-core chipset by NVIDIA found on the European One X is yet not compatible with LTE. Though this model was not released with those issues, it revealed another one — message notification bug, which was fixed soon. The phone was priced at $199.99 on contract and $550 off contract.

The abovementioned two models look similar, and the only difference was the built-in radio. We can’t say the same for the Sprint’s variant of the phone, which was even renamed to the HTC Evo 4G LTE to correspond to the carrier’s traditions. The carrier also added a kickstand to the phone and completely changed the design. Among the many differences we must note the red line peculiar to Evo line. The next big surprise was the Simultaneous Voice & Data. The rest of features remain the same, thus the processor came with two cores clocked at 1.5GHz. At the end, the Evo 4G LTE was delayed and was not launched on May 18 because Apple was trying to prove to ITC the HTC One X and the Evo 4G LTE use the same menu settings as its iPhone 4S. However, it was denied and after being cleared from government’s custody, the blocked phones entered the market.

All the abovementioned models sport almost the same features: a 4.7-inch Super IPS LCD2 capacitive touchscreen at a 720×1280 pixel resolution, 32GB of native storage, 1GB of RAM, an 8MP camera working with ImageSense new camera technology, a 1.3MP frontal camera, Android 4.0 Ice Cream Sandwich with HTC Sense 4.0 and Beats Audio and so on.