Not long ago leaks about the HTC Doubleshoot came from a Chinese source, 911Sniper. Now the same source gives us a chance to have a look at several blurry pics of other new HTC devices. The first smartphone is assumed to be the HTC Kingdom.

The pic is so blurry that we cannot make any guesses about the specs of the smartphone. The only detail made clear is the dimension of the screen, which is qHD (540 × 960). So the device will be coming with a large display: it’ either going to be 4 inch or even 4.3 inch. Another feature which comes with the pic is the front facing camera. Overall the device looks like a unibody item with a typical HTC design. 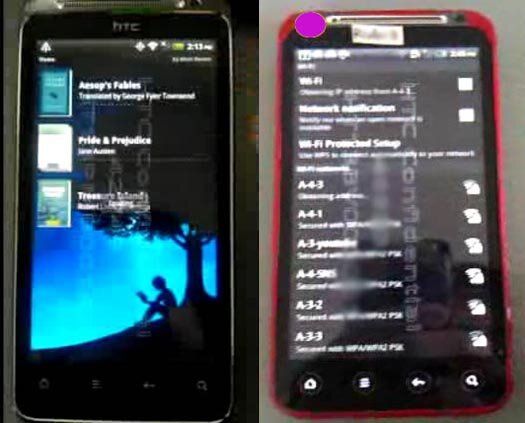 Next to the HTC Kingdom we can see the leaked pic of another unreleased smartphone — the HTC Rider. This gadget looks like the HTC Kingdom, and the specs of this unit are totally covered with mystery. It’s rather interesting to have an unreleased device leak in red color, as most of the time we were getting the leaks in silver or black color versions.

There’s just no way to learn whether the gadgets will ever land to the U.S. but the release somewhere in Asia or Europe is guaranteed. The release date remains unknown just like the price of the gadgets. As soon as we get the details about the devices we can at least make assumptions about the availability of the HTC smartphones. The leaks make us think that we will probably see these gadgets this year.

Previous Post Microsoft's Mango Update to be Called Windows Phone 7.5 Next Post HTC Droid Incredible 2 for $100 via Amazon
Recommended for you