It looks like the HTC Hero is going to get a new system software update. The system upgrade has version 3.36.405.1 and is 6.41MB in size. The phone can be updated Over-The-Air but you have to use free WiFi hotspot or an unlimited data plan.

The HTC Hero is one of the first phones of the company which has been launched in 2009 and that time it ran Android 1.5 Cupcake. But as Google began to develop its platform more actively, this phone was one from those which periodically received the updates. As proof of my words I have to recall the cases when the HTC Hero was updated to Android 2.1, then to Android 2.2 and lately there were rumors it would be updated to Gingerbread. 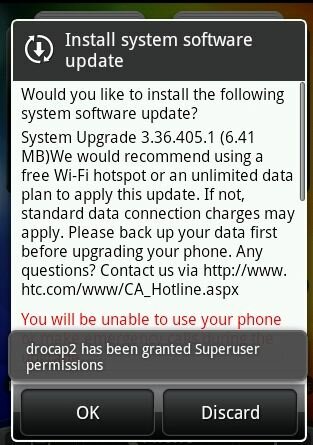 Anyway, the HTC Hero is equipped with many useful features and without any updates it is  good in performance, though 528 MHz processor is now too fast nowadays, but other features the phone sports are quite well: 3.2-inch TFT capacitive touchscreen, 288 MB RAM, 512 MB ROM, 5 MP with resolution 2592×1944 pixels and autofocus, standard 1350mAh battery providing up to 3 hours of talk time and 750 hours of stand-by mode in 3G network.

So I can only advice you to check out whether the update is available for your phone, and if you risk and upgrade your handset, let us know what new features it brings or does it work in general.

HTC Hero to Get Android 2.1 Update?