It seems like the HTC Flyer is coming to T-Mobile. Why do we think so? Well, first of all, during the visit of this HTC tablet to FCC it came out that it has 1700MHz frequency support for 3G data, and this is the band T-Mobile’s using.

Besides, there are rumors that the HTC Flyer is really coming to the U.S. on July 6, most likely via T-Mobile. It’s actually the first time an exact date is mentioned, but we can’t be sure it’s true, so we’ll find it out in a couple of weeks — just be patient. 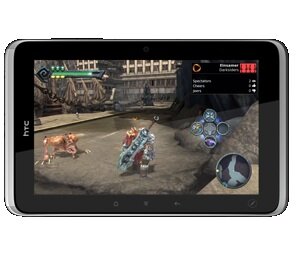 The HTC Flyer, the first tablet of the Taiwanese company, is only 7 inch (with 1024×600 resolution), which is much smaller and much more comfortable than many other tablets in the market. It has a 1.5GHz single-core processor, 1GB of RAM and a 5MP camera. The HTC Flyer runs Android 2.3 Gingerbread, but later it’s going to be updated to Android 3.0. As you could have expected, it runs the famous HTC Sense UI, too. Besides, the HTC Scribe – a special stylus for drawing and writing on the tablet – is also worth mentioning.

Let me remind you that the Wi-Fi version of the HTC Flyer is already available for about $500, and now the 3G version is coming. I don’t know for sure how much it will cost, but I guess it will be more expensive than the Wi-Fi version.

Previous Post HTC Changes Mind: Desire Will Get Gingerbread Next Post HTC Kingdom Gets FCC Approval
Recommended for you

HTC Flyer to Get Honeycomb After Launch