It  becomes habitual to read about a consecutive complaint about a fault found in an HTC device. It is a bad habit to kick a fallen fighter, but what can you do, when users are more concerned about the value for money concept rather than what will eventually happen to HTC this year? 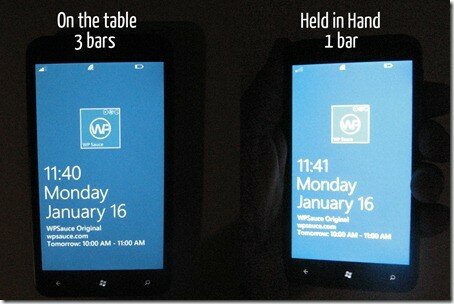 No particular news about HTC Titan antenna issues, but WPSauce writes that the reason behind this is the metal unibody design of the handset and that the users will have to be patient until the company solves the problem. In a response to a Taiwan based user of HTC Titan Shushovan De, HTC said it is examining possible solutions now, but cannot state how long it will take until the problem is solved. HTC advised Shushovan De to follow news on HTC official website and its official Facebook and Twitter pages. WPSauce in its own test revealed that when you put the Titan on a flat table it shows 3 bar AT&T service, but once in hand, it drops to 1 bar.

Anyway, possibly HTC has already dropped hopes of reviving the Titan and one confirmation of this theory can be the early announcement of the HTC Titan II by HTC at CES 2012. The new model will have a different body material, as CNET called it “a soft touch finish of a lighter grey.”

HTC Titan Getting its Dose of Update