The HTC ChaCha – the so-called “Facebook smartphone” – is the favorite device of almost all social network lovers. It has a special “F” button designed for easily sending messages and changing Facebook status. 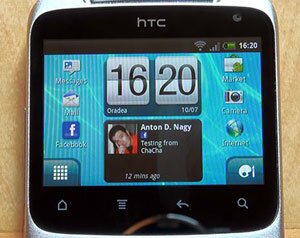 Here is a very interesting video created by Pocketnow.com guys. It shows how HTC has integrated Facebook in HTC Sense. Have a look:

Let me remind you about some of the specifications of this “Facebook smartphone.” The HTC ChaCha works in both 2G and 3G networks, has a QWERTY keyboard and a 2.6-inch TFT capacitive touchscreen (with 480 x 320 resolution) that shows 256K colors and is protected by Gorilla Glass technology. Its processor is 800MHz, which, together with 512MB of ROM and 512MB of RAM, is more than enough for a smartphone created for social networking. The memory of the HTC ChaCha can be expanded up to 32GB, and a 2GB microSD card is included in the box.

As for the cameras, this Facebook-dedicated smartphone has a 5MP camera (that is able to shoot 2592 x 1944 pictures and VGA videos at 30fps) with auto-focus, LED flash, geo-tagging and face detection. The phone is powered by a standard Li-Ion 1250 mAh battery and runs the latest version of Google’s OS – Android 2.3 Gingerbread.

HTC ChaCha to Get Stronger Processor