We’ve already learned the HTC Titan was launched in the UK with two other awesome handsets, the HTC Sensation XE and the HTC Radar. Now we’re waiting for it in the U.S., and according to an earlier announcement the phone will ship in Fall. Seems like everything’s going according to plan, and as we’ve learned from the HTC Sensation XE review, its selling feature will be Beats Audio (I am saying this with big constraints).

For the HTC Titan (and probably for the Radar, as well) the selling point will be hidden in another “place”– Microsoft’s Windows Phone Facebook page obtained a screenshot and came to the conclusion that AT&T will offer the HTC Titan as part of a buy one, get one free promo when it’s launched. 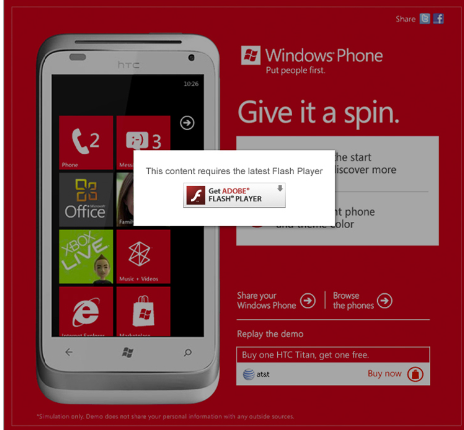 This is a little bit strange because due to its tremendous 4.7-inch touchscreen, a 1.5GHz single-core processor, Windows Phone Mango and improved web browsing thanks to Internet Explorer 9 the HTC Titan seemed not to have any problems with the realization. Check out he HTC Titan hardware review to get answers to all possible questions that may come forth.

Well, the HTC Titan’s price is not unveiled yet, but we hope it’ll be launched at the usual price $199.99. Taking into account it’ll be offered as a BOGO device, the price is rather reasonable. I guess that’s a good marketing campaign to ensure big sell volumes.

HTC Titan and Radar are available for pre-order in US