AT&T brings the HTC Vivid in to fill the gap it created by leaving its customers with a “not-that-much” choice among Android and HTC phones. Though high end Android smartphones are popping up around so frequently, AT&T so far had only the Inspire 4G  along with the Windows Phone powered Titan and HD7S on its list. With a name that truly matches its vivid nature: a name that is now being disputed by a well known adult film maker, looking beautiful and a little unusually big HTC and AT&T hope it will be attractive not only because of its design and hardware but  thanks to its 4G connectivity in the AT&T’s newly relaunched 4G network.  Obviously, the carrier has chosen the most outstanding one left after Verizon’s “campaign”, but if AT&T wants to show a real competition to Big Red, it must have more impressive smartphones to attract consumers; otherwise the latter will become unreachable for it no matter how the deal with T-Mobile closes.

AT&T launched its 4G network a month ago, so the carrier needed a powerful smartphone to test the whole might of it. The “warriors” came from two manufacturers and are armed enough. It comes to the HTC Vivid and Samsung Galaxy S II Skyrocket. Our hero comes in a design that can’t be confused with any other smartphone. It is also packed with features that made many geeks think AT&T will offer it for a high price, but the carrier made a good decision to set quite an affordable price for the HTC Vivid. Read on the Vivid review to find out what other maneuvers the manufacturer and the carrier used to win users’ hearts.

If we were asked to describe with one word the design of the HTC Vivid it would be – simple and square. The phone actually reminds me of the Apple iPad design, but they say it looks quite similar to the HTC Evo 4G. The casing is in thick plastic, and it is surely a concern for those who are keen on keeping their devices always look as if they are just out of the factory. That can also make the device quite slippery and due to its big dimensions could require good holding abilities. The Vivid cannot be branded as the slimmest smartphone on the market, but it is not fat either (128.8×67.1×11.2mm). The same cannot be said as to its weight, for it is surprisingly heavy with its nearly 177 g, it’s heavier than the Galaxy S II, the iPhone 4S and even the HTC Titan with its aluminum case. But let’s not forget there are people who like their device to be heavy for better grasping. 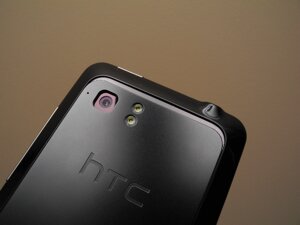 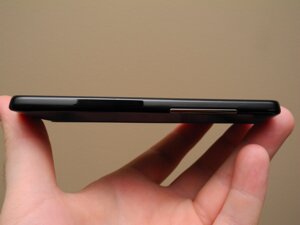 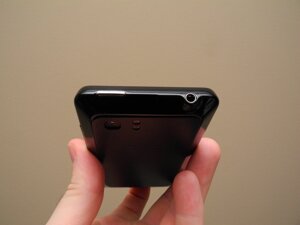 On the front there is that huge LCD screen, which even lets the phone have a small sector below for buttons, like Home, Menu, Back and Search. On the top there is the AT&T famous logo, and that’s all for the front face actually. The beveled contours of the HTC Vivid make the phone look like a small pyramid if looked at from the side. The back is covered by a contrasting metallic layer to protect the phone from scratches, which is actually removed by pushing it upwards. There is a white volume control button on the side and a power button. The headphone jacket can be found on the top and the micro-USB port on the other side.  There is also the camera eye with the dual-LED flash.

The HTC Vivid boasts of a 4.5-inch 540×960 qHD super LCD screen, you can’t see any pixelation from distance. The resolution is fantastic; it is even bigger than the Samsung Galaxy S II’s display resolution (480×800 pixels). The colors are rich and it is just fantastic as to its viewing angle properties, in fact it has nearly 180 degree viewing capacity. It’s huge as compared, for example, to Samsung’s Super AMOLED viewing angle. Because of Vivid’s screen size it becomes easier and more comfortable to take videos of large scenes. 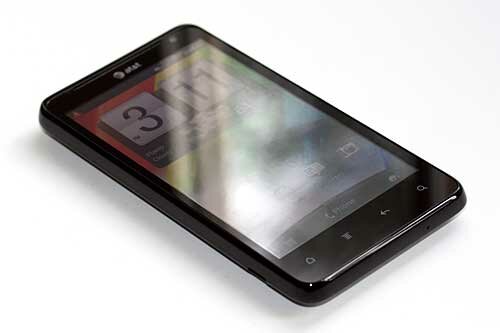 The HTC Vivid is equipped with a respectable 8MP rear camera with f/2.2 lens, a dual-LED flash and an auto-focus, and is capable of recording Full HD videos at 1080p. It is here that the phone’s naming is explained; the photos are vivid and in very warm colors. What’s next? The camera’s instant picture taking ability is amazing and has a very quick and comfortable options menu, especially low light and close-up options. The menu also features pretty photo editing tools, like converting images to black and white, sepia or some retro-looking filter — all can be done right inside the camera mode.

Video provides close to life quality, but it will need a decently fixed recording to avoid fuzziness, as the phone’s stabilization functions need to be improved in time alongside with improving noise reduction features.  There is also a standard 1.3MP front-facing camera for video chatting. 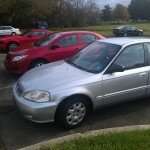 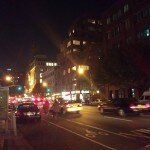 One of the advantages of the Vivid is its 4G LTE feature. The device supports for HSPA+ 14.4Mbps but provides no less speed than its counterpart, the Samsung GS II with its 21Mbps HSPA. Some people are discontented, since there is no a turning off option for LTE, so if anyone wants not to have it, they will have to go to a distance where LTE is not be available.

As to the software side, we can say with a clear conscience that the HTC Vivid offers everything. It runs Android 2.3.5 Gingerbread with HTC Sense 3.0, so there are all apps connected with that. The phone’s remote control features are especially good. Some people complain of the abundance of various applications, which are not of general use, but they can be handy sometimes. Naturally there is a lot of AT&T presence well discernible in apps like AT&T Code Scanner, AT&T FamilyMap, AT&T Navigator, myAT&T and yes, some people find this much pretty annoying. There is also MOG Music, Need For Speed Shift game demo version, Polaris Office, Qik Lite and YPmobile. You can play the Need for Speed game on your HTC phone or check out the new trailer for Transformers directed by Michael Bay, who also helped with the latest Need for Speed game trailer for the newest game in that franchise.

HTC has not reached an ideal in making the HTC Vivid, but the phone is good anyway. Once people make their decision to have this phone, they stick to it and nothing can darken its image, even if it has slight disadvantages. The characteristic trait of the Vivid is to be quick and not burdensome. The device makes this possible with its fast dual-core CPU, qHD display, 8MP camera and finally 4G speed. The voice precision enthusiasts would not comment the Vivid as well as lovers of pale pictures, for the Vivid gives rich colors and vivid representation of the reality.  Compared to other Android devices with nearly same features, the Vivid is highly economical with its AT&T set $99.99 price of course with contract.

The HTC Vivid is not a loud smartphone, but HTC kept its motto – it’s just quietly brilliant.