Do you live in the US and want to get the most powerful smartphone running Windows Phone 7.5 Mango? You have no chance! At least you can’t get it from the carrier directly. The AT&T HTC Titan was sold out yesterday, so you have to look for it elsewhere, say, at Amazon or Best Buy. 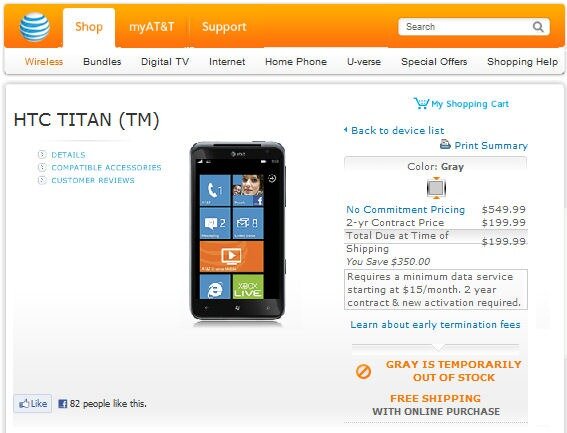 The HTC Titan and the Sensation XL are the company’s two most powerful devices in terms of screen. All in all, both handsets are almost the same. The difference lies in the operating systems they run. But if the Android-flavored model is still available in mobile operators’ stores (of course, out of the US territory), many users are having a hard time in getting the Titan.

If you wonder what features make this handset so beloved, I recommend that you drop by our HTC Titan review and discover its key features. But if you have no time for it, I’ll list a couple of them. The HTC Titan is packed with a 4.7-inch S-LCD capacitive touchscreen, 16GB of internal memory, 512MB of RAM, an 8MP camera with a LED flash, a 1.5GHz processor and so on.

I only have to congratulate all those consumers who managed to get the HTC Titan, and wish the best to the rest.